My! My! Mamey Ice Cream. 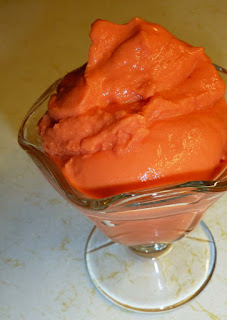 I have one particular friend, who will go nameless, but who has a blog titled Adventures of a Radical Fat Bride. The blog is hysterical and I read every entry with great anticipation. However, she recently slammed cilantro and, God forbid, the mango in her blog!  I was going to flag this offense to Google, but weighed my years of friendship with her and thought better of it. Well, I can only imagine what she would do with today's recipe... Mamey Ice Cream. Heathen!

Moving on.... For all of you who do not know what mamey is, it is a luscious tropical fruit shaped like a small brown football... Not appealing you say? Well, never judge a book, or a fruit by its cover!

Mamey comes in a number of varieties, but here in Florida, the two most popular varieties are the Pantin, also known as the Key West Mamey, my personal favorite, and the Magaña. The difference between the two is that the Key West Mamey is smaller and sweeter, while the Magaña is larger, not as sweet, and the flesh is somewhat stringy.

One thing to note when selecting a mamey is that you do not cut the fruit open until it is soft to the touch and wrinkly. Also, it takes nearly 18 months for the fruit to ripen on the tree, so you want to make sure that the fruit you purchase is not picked before its time. That means that it must be red inside, bright red. So pick at the skin of the fruit with your nail and see if it's red. If it is, it's a good buy. If it's not, goodbye, move on.

The fact that the fruit is rock hard when you buy it is not a problem. In fact, if the flesh inside is red, the fruit will soften in a few days when it becomes fully ripe. To speed up the ripening process stick the mamey in a brown paper bag and leave on your kitchen counter.

In Miami, there are many places that you can purchase mameys. Any Cuban fruit stand or grocery store carries them. Palacio de los Jugos, in Miami has some of the very best mameys I have found. They have a couple of locations in the South Dade County area and not only do they have mameys, but guavas too... but more on that in a later blog.


You can also find mameys along roadside stands in Homestead and Florida City. One of my very favorite roadside locations in Florida City is Robert is Here. And great news for those outside of Miami! Robert ships anywhere in the US! Go to Robert is Here to order your mameys or other fruit or to learn more about Robert. I've been going to Robert is Here since I was a kid. I love the fruit stand and I love Robert and his family. They are always there to help and are very knowledgeable about tropical fruit. If you have a question on tropical fruit, Robert is your guy. Additionally, if you ever get the chance to visit the fruit stand, be ready for some of the best shakes in Florida. Robert makes a killer mamey shake! But that's just one of the many flavors he has. It's all done with his fruit and all are delicious! 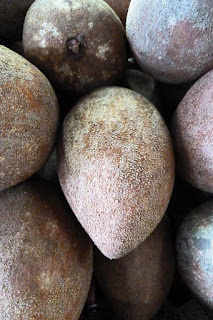 In fact, every time I have someone come down to visit me in South Florida, I try to take them by Robert is Here. Last year, a good friend and former Marine, David, came from Houston to visit. He had never had a mamey shake and was wary of it when I ordered it for myself. But no sooner did he taste mine, that he fell in love with the shake. Since then, David has asked me how he can get his hands on a mamey tree! Unfortunately, mamey trees don't grow well in Houston, but my wily friend is thinking of putting his tree on wheels so he can roll it in before the first frost! And it is because David loves mameys so much that I am dedicating this mamey ice cream recipe to him. Get your hands on that tree David, or call Robert. Here's an ice cream you'll love!

This ice cream is simple and SO delicious! It's creamy and best of all, the way I make it, it's not too fattening!

My My Mamey Ice Cream


3 Cups Mamey Pulp - Get the Key West Mamey for best results. Two small mameys should do it.

1 1/2 Cups Cream - I use the no fat cream from Breakstone, so that reduces any fat from the usual ice creams. If you prefer, you can use half and half.

1/2 Cup Sugar - The mameys I used were so sweet that hardly any sugar was necessary. If you've picked yourself great mameys, you won't have to use much sugar either. 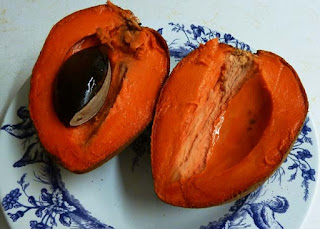 Cut open the mamey. It should be a rich red color. 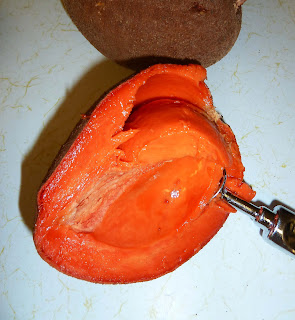 Using an ice cream scooper, scoop out the meaty flesh of the mamey. The hard part is not eating the sweet meaty  flesh before you make it into ice cream! According to Robert's site, mamey has the consistency of cheesecake, which is true. I love it. 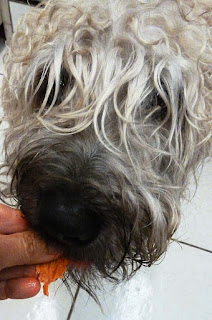 Winslow couldn't wait for the ice cream. He loves mamey as much as David does and insisted on a piece before all of it was tossed into the blender! 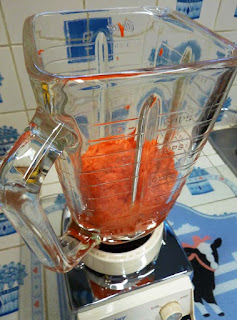 Place three cups of  the fruit which has been scooped out into a blender. Add the sugar and the cream and blend on high. 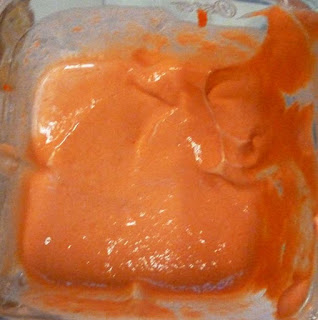 Once blended, the mixture will have a thick rich consistency. 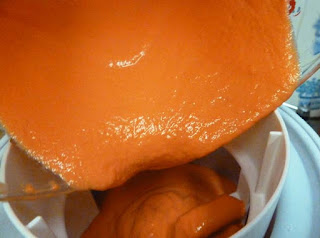 Pour into an ice cream machine and let it churn. It takes about twenty to twenty-five minutes in my machine. 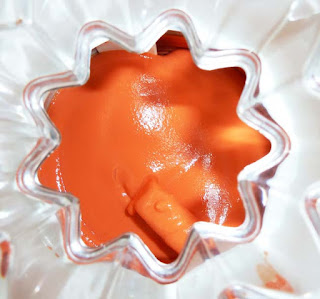 You can see the rich consistency of this ice cream as it churns. 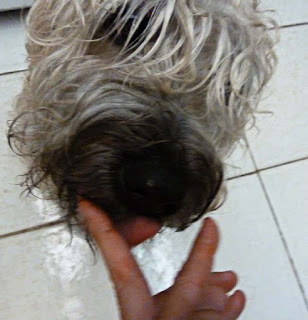 Once done, give Winslow the first taste of the ice cream. 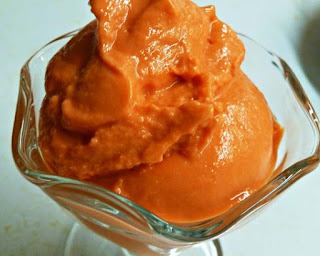 This is without a doubt one of the most delicious tropical ice creams. If you want to make a shake, you can use the fruit directly with vanilla ice cream in a blender and some milk and sugar to taste. If you want a thick shake, a la Robert, then don't use much milk. I love to eat mamey ice cream, and so does Winslow Dog. For those of you who love tropical fruit, and I don't mean my Radical Fat Bride friend, this is a treat for you! Oh, and by the way, David, I found a great guy who can hook you up with a fruit bearing Key West Mamey tree! I'm planting one myself!
Posted by Winslow Dog at 6:00 AM